Chaos Group, the makers of popular rendering engine V-ray has announced that with their November update, the renderer will use ray tracing cores present in Nvidia RTX GPUs to accelerate the rendering process.

This is something different from GPU support in their ray tracing engine as the previous implementation used by the engine utilizes GPGPU (Geneera processing with GPU) to accelerate the rendering process.

The current implementation uses Ray tracing cores introduced by Nvidia in their RTX series GPU which is used to create real-time raytracing effects in games. With Nvidia’s implementation, the rasterized graphics are combined with limited raytracing features due to speed constraints in games. However, Chaos group will be using these cores for full screen ray tracing without rasterization.

Chaos group states that rendering improvements include from 7% to staggering 177% according to the scene with different complexity with average speed bump seen at 40%. This is just the beginning and Chaos Group hope that this will improve further with 2x to 3x speedups and their software is now more ready for Nvidia’s future GPU improvements.

This is available for free to current V-Ray Next users of 3ds Max customers. RTX support will be coming soon to V-Ray Next for Maya.

AMD Radeon users might want to lean towards Radeon Pro Render, however since AMD has yet to release raytracing enabled GPU, this is limited to GPGPU usage only. But hey it’s free and works on Nvidia also.

What is renderer in general?

A 3d renderer relies on other 3d programs to create assets such as human, car etc models. Such assets are given materials based on certain characteristics like metal, plastic etc and are then converted to final output with the process called rendering. 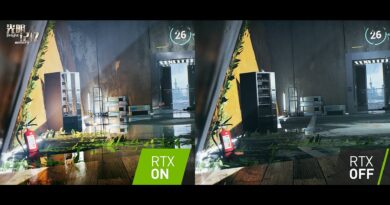